Who, or what is an Ant Hunter? 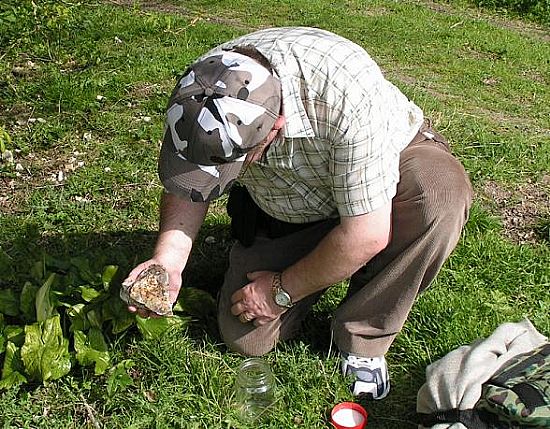 Down the ages of time, from cave men to the present day, man has hunted for food. These days it is more often with a camera or a pair of binoculars that men track down animals, than with a weapon, as man rarely hunts for food any longer unless he is in the wilderness. 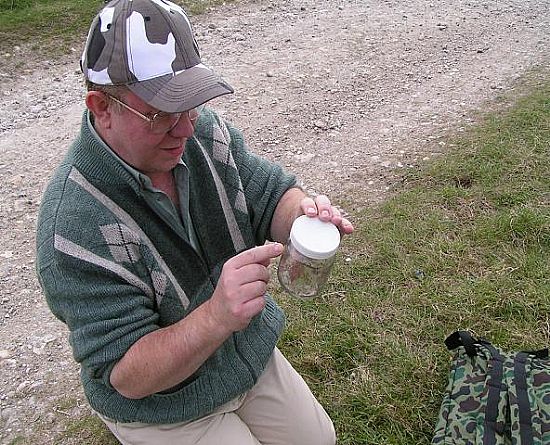 All of the photos which appear above were taken by my wife, when we went on an ant hunt into the local hills of the South Downs of West Sussex, England in May 2007.

These photos show how Myrmica can often be found nesting under a stone. 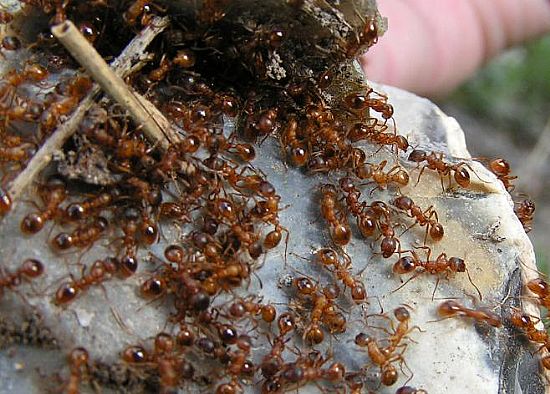 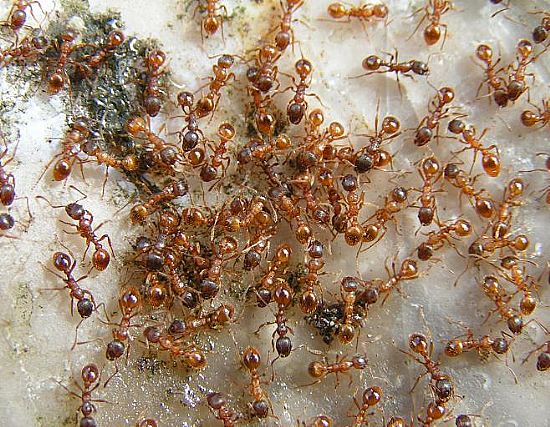 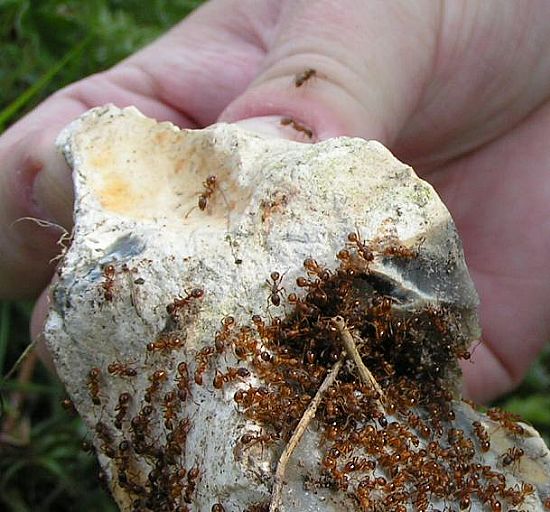 I used to wonder why some people kept large trays of dead butterflies pinned under glass, when it is far nicer to watch them flutter from one flower to another in their search for nectar; but sadly this happens to be the way men think that the only way to see a rare insect up close, is to view a dead specimen. Notice on the photo below how worker ants, who are tiny compared to the size of my hand, have no hesitation about attacking, what to them is a giant invader. The sting of such a small ant as Myrmica can be very painful, as was the case when several of these little ladies managed to find soft parts of my skin to inject their vemon into. Ouch!!

Ant hunting involves catching ants alive, and not actually killing them. Although it may be fine to have 1 or 2 dead specimens for study under a microscope, it is still far more challenging and enjoyable to study living ones.

Man has always considered himself to be the hunter, but of course many other animals hunt for food. Ants are no exception to this, as every day many ant nests send out large numbers of foraging workers of all sizes and colours to hunt for food. Like lions will eat dead animal carcasses they may come across, so ants will also pick at dead mammals or birds, or carry away dead insects, as it is easier than having to fight and kill living prey; and the risk of injury to themselves is avoided, whereas they may suffer injuries from battling living prey. Ants only ever hunt for food, unlike humans who hunt for the pleasure of doing so, or to collect trophies such as animal heads or skins.

My greatest trophies are from the videos and photographs my wife and I have taken of wildlife, so unless you really want dead specimens to study, my advice is hunt with a camera and only collect what you really need, whether it be living or dead. We don't wish to endanger any of the wonderful wildlife around us, so please think before you set out to hunt; and remember, you too may be the hunted from some animal or other if it were in different circumstances!


Okay, so you want to keep and study ants?

Well, firstly do you know what an ant looks like? Most folks do, but there is always some confusion between Ants, and their close cousins Wasps.
Though ants belong to the same order of insects as do wasps, bees and sawflies (Hymenoptera), the ants belong to the family Formicidae; whereas Wasps belong to the super-families Vespoidea and Sphecoidea repectively. Also wasps and bees may be solitary insects, where ants are principally social, having evolved into colonies of hundreds, thousands or millions of individuals living together as a tribe or mother(s) with her daughters and other close relatives (sons, sisters, nieces etc).

An ant may have similar colours to a wasp, and may even possess a sting; but here the simularity ends, for wasp colonies (except perhaps in warmer climates from us) dies out after 1 season lasting 6 or 7 months; whereas an ant colony can survive for many years, and in principal could last forever if it can replace the fertile queen(s) or mothers of the colony every so often!

All ants are insects, which means they all possess 6 legs. By now, even the most novice of us will know what the outward appearance of an ant is, with a head onto which are attached 2 antennae, 2 compound eyes, the jaws and mouthparts.
The head is followed by a middle segment or Thorax which is the neck and chest. Then comes a thin segment called the Petiole, which may have 1 or 2 segments to it, rarely more.
The final part of any ant is the abdomen or Gaster.

Right, let's assume for now that we all know what an ant is; and more importantly, what they look like. It is no use going out on a cold, wet day in December with a load of collecting jars if you live in Britain or Canada say, as the chances of finding an active ant colony are virtually nil at this time of year!

What I tend to do is, firstly try to decide what species I wish to collect; and then wait until the Spring when it is warm and dry, but not too hot. April and May are good months for this.
My favourite method is what is best termed as "Stone Lifting", where you find a suitable chunk of rock or stone (old quarries or dry stone walls are good for this) and turn over the stone.
A lot of the time you'll only find worms, ground beetles or even on the odd occasion a snake or lizard; but where ants are nesting in the area you will find many nesting under flat stones.

Rather than destroy or decimate the nest, I usually look for queens under the rock or just on the soil surface, as they do like to warm themselves in the mild heat of the springtime sunshine.
Let's say it is a nest of Myrmca rubra I have found, and that it contains a total number of 7 queens and approximately 300 workers.
Take no more than 3 queens maximum is my advice, as to remove more may endanger the continued life of the colony; and that is not the idea, as you want this colony to go on producing more future queens and continue to exist.
Again with workers, take away no more than 70, as although your captive colony can function well with a lesser number of ants, the wild colony will need more workers for it to survive.

Let's say you are out in the countryside on a warm April day. The sun is shining, birds are singing and bees are buzzing around your head.
You see a single foraging ant on the ground, so you watch it for awhile. You then discover more ants going back and forth along a trail. Trying to decide on where their nest is, you follow the line of ants. It's a bit like looking for the bath plug at the end of the chain. If you go one way, the line of ants gets less; but the other way and you find it thickens out into many more workers. It is in this area that you will most likely locate their nest.

Not all nests are accessible, as ants may use natural defences such as bramble bushes or thickets of vegetation to protect their nests. Nests under stones are generally the easiest to inspect, and the large mounds that wood ant species build are also easy to find. Although such mounds are heavily defended by thousands of workers, and while 1 or 2 ants are no major threat, many hundreds of angry ants will soon put the bravest ant hunter to flight, even one as experienced as myself.

No matter how well you protect yourself, you will get stung or bitten once you interfere with an ant nest; as you would attack an invader to your own home to try to stop them. So the ants will give their lives in defence of their queen and home.
You will not always find ant nests, but please remember this. BE CONSIDERATE WHEN YOU DO FIND ONE....... as it may have taken them many years to build a rather complicated structure of tunnels and chambers, and you could destroy this in a matter of minutes if you dig into it like a bull in a china shop.

My advice here is, if you cannot take ants away without causing any harm to the nest....... LEAVE IT ALONE; and try looking somewhere else for the ants you want.
I can assure you that you will find what you seek, as I have often walked away from a dozen nests until I eventually found the one which gave me a nice colony to take home!

Never despair, as Ant Hunting involves a lot of patience, some skill and a great deal of self control.