Most people who see Black ants running around will just think,"those horrible things" as black ants are often found invading your kitchen or picnic table. But; how many will look more closely at these little insects? For a start, they do not all belong to the same species.

F.fusca is a large black ant found in Britain up as far as Derbyshire in the north; but then it starts to give way to its more northern relative, F.lemani. Both are so very much alike; but there are some minor differences. Fusca nests usually have only 1 or 2 queens per nest, sometimes more; but I have found 3 or 4 queens in nests of F.lemani; and on the odd occasion one can find from 7 to 12 queens if your really lucky !  Formicine ants have larvae which spin a cocoon instead of having pupa which are bare and the workers do not possess a sting like myrmicines; instead they bite with their strong jaws and squirt formic acid into the wound. This is every bit as painful as the sting used by their red cousins. Fortunately for us, these 'black'ants are less aggressive and more likely to run away from a fight. Instead of attacking, they usually pick up their brood and make a hasty retreat deeper into the nest. Having said this, Fusca workers will attack if there is enough provocation, e.g. someone digging up their nest trying to steal their brood or capture their queens. For their size, ant workers can have the same courage as a lion and be as obstinate as a charging elephant. All Formica species have major and minor workers; that is, big workers and small workers. In a F.lemani nest, I have found 4 distinct sizes of worker; with the largest being almost as big as the queens. The larger workers did not appear to have the role of "soldiers" in the nest, as the smallest workers usually seem the first to go on the offensive in defense of their nest and brood; so size evidently makes no difference to an ants ability to fight in battle, regardless of whether the enemy is another ant, or a giant foe like us!

Photo by Shane, a member of Ant Hill World. 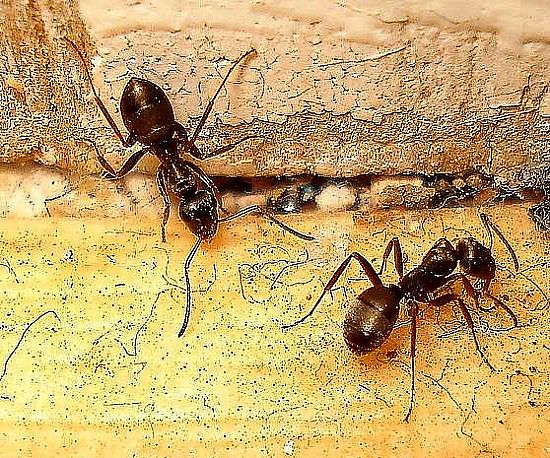 This photo shows the head and thorax of a queen in very good close up detail. Photo by Wes Offi. 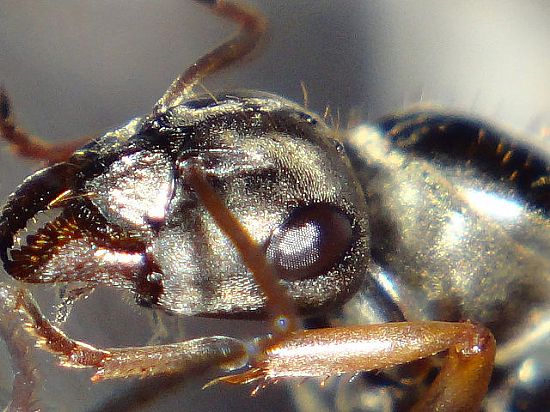 These workers of L. niger look more like wood ants with the sunlight shining through their bodies. Photo taken by my wife Jenny, who is the admin of Ant Hill World forum. 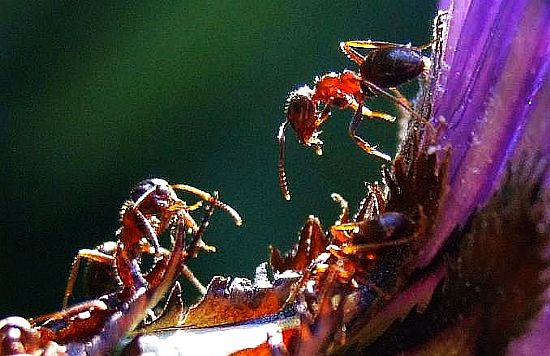 The little black ants most commonly seen in our gardens are Lasius niger. Fast moving and quite small, they can be found on plants, where they use aphids for 'milking'of honeydew, rather like a farmer milking his cows. The aphids suck the sap of plants and then excrete a sweet syrup, which the ants lick up as food. All ants love sweet food; as you will see if you put a drop of honey down near an ants nest. Although ants could perhaps live on a diet of sugary food, the ant larvae (or babies) do need a diet of protein to develope. This has to be provided from dead insect prey which has been collected by foraging worker ants. Nurse ants, whose job it is to feed the growing larvae, pre-digest this food by chewing up bits of meat and feeding the larvae with a kind of "soup"which is rich in protein for the 'baby'ants. 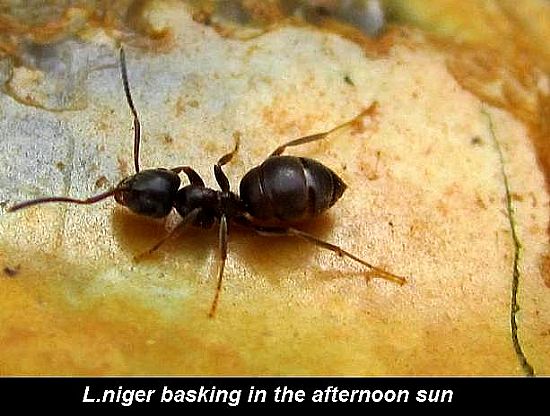 Tapinoma erraticum is a fast little black ant found in Southern England. It never builds very large nests, although it can have several queens per nesting colony and usually reaches a colony size of around 5,000 ants.

I first came across this ant back in 1977 in Thetford Forest in the East Anglian county of Norfolk. It is a fairly large ant as far as the Lasius genus goes, has very shiny jet black colouration; and runs up and down trees in such a way that it is evidently following a scent trail laid down by other foraging workers. It also gives off a very strong scent which smells like lemons, as this ant belongs to the group known as the "Citronella ants." Like the wood ants, it often nests in rotting tree stumps; but does not build the familiar thatched mound that ants such as Formica rufa does. Instead it tends to burrow out the stump much in the way termites or Camponotus ants do, digging out its chambers and tunnels inside the wood itself. When winter comes the colony retreats deep into the soil to avoid being frozen, only using the wood nest during the warmer months.

This black ant species is a member of the Myrmicine family group. It has a fiery sting, just like her red ant cousins. You may find this species in your garden, but they are much more at home in open heathland or on the cliff tops along the warmer coastal regions of the south of England, such as Dorset or Devon. It is a very carnivorous ant and eats lots of insect prey. It also makes a large nest which may contain several thousand ants. These ant are also known to collect seeds which are used as food. Weather conditions play an important part in the production of winged sexuals. Hot, dry summers make for high numbers; while cooler summers produce few, if any at all, virgin queens and males. Tetramorium is often host to parasitic ants, which I have mentioned in another chapter of this site. Unlike many other Myrmicine ants in Britain, Tetramorium tends to fly early in the morning in June; whereas most other British ant species fly in hot afternoons or early evenings of July and August. Although wood ants such as Formica rufa fly in June as well.

Black ants nests can often be found under stones either, in a garden, or in an area of countryside where rocks lie on the soil surface; e.g., an old stone quarry or by a dry stone wall. The ants seem to like a stone roof over their heads, as it provides shelter from the rain; but stones and rocks can get baking hot under the rays of the summer sun. What the ants do to escape being baked to death is, they go deeper underground until things cool down to a more tolerable level.

A good place to see Formica fusca in England is a place called "The Valley of Rocks" near Lynton in North Devon. For Formica lemani, try the hills of East Cheshire and the Derbyshire Peak District; you will also find red ants in these locations as well. If you are lucky enough to have access to a good sized garden, then you will no doubt find our little friend, the common garden black ant-Lasius niger, which possibly has more nests in close proximity to humans than any species of British ant. All the Southern counties of England are rich in ant species, from Kent in the East, to Devon in the West; with Dorset and Hampshire having the most species; about 37 different ant species in all, which is considerably more than can be found the further north one goes in the British Isles. The more North you go, the fewer the species number; but even in the highlands of Scotland you will still find ants, which proves their resilient nature to endure life in an area where it has long very cold winters and short summers. Ants are tough little creatures all in all, and will survive in some very inhospitable places!

Without doubt, the easiest way to find and start a black ant colony is to capture a young queen who has just removed her wings after her nuptual flight. If you do take ants from a wild nest, please DO NOT remove the queen as this will lead to the death of the colony. If however, the colony contains many queens, then you may safely take a few queens without causing too much harm, as long as you leave some queens behind in the nest, then it should survive all being well.